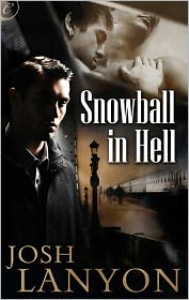 To start off this review, an important point should be made. This is not a traditional romance, in the sense of Happily Ever Afters. It is much more of a mystery novel, with Nathan and Matt’s romance playing a beautiful subtext to the whodunit behind Phil Arlen’s murder.

Josh Lanyon is probably my favorite m/m writer of all time. His mysteries are thoughtful, entertaining, and incredibly well-written, and his ability to write romances that are both realistic and incredibly sweet always have me clamoring to snag his newest releases. Snowball in Hell was no exception, even though it isn’t your standard “romance novel” fare.

Set during WWII, this is the first m/m romance I’ve read that was set in a time where not only was homosexuality dangerous from the standpoint of having to worry about hate crimes and prejudices, but it was also dangerous in the sense that it was illegal. If Nathan and Matt’s predilections had been discovered, they would’ve faced jail time, or worse, being committed to an insane asylum for “treatment” which included ice baths and electroshock. While part of me knew of course that this sort of thing had happened in the past, it’s a new experience entirely to be subjected to these very real fears right along with the heroes of a story.

While there was no traditional HEA persay (and how could there be, in a time when the two lovers could be incarcerated or tortured for their love?), there was still a feeling of hope for them at the end. Sure, as a card-carrying member of the HEA Club, I would’ve loved to have seen all of their problems solved and for them to live together and raise a dog or something, yet I was still as satisfied with the ending as I possibly could’ve been for a m/m story set in this time period.

Overall, a very intriguing mystery, with just enough romance and lovemaking to satisfy the romance junkie in me.