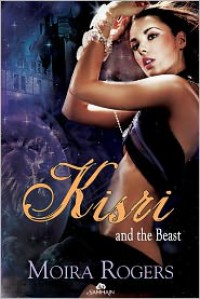 Fed up with waiting meekly while the war between the shifter clans leaves her vulnerable to greedy suitors bent on capturing both her wealth and beauty, Kisri, the cousin of the king, disguises herself as a boy with the help of a magical charm and blends in with various soldier camps in an attempt to reach her cousin before she is taken in a forced mating. Spoiled by her doting cousin, she knows that he will offer her the protection of his house and allow her to choose her own future mate, and can only hope that she can continue her subterfuge until she reaches him.

Unfortunately for her, it is not long before her true identity is discovered in Ennon’s camp, and he is summoned to his tent do discover to his consternation that he recognizes the girl — Kisri — from when she was still a child.

A child no more, Ennon cannot help but notice her beauty, and knows that despite her apparent ability to take care of herself, she still needs protection. He immediately sends word to the king’s camp of her presence in her camp, and is soon bidden by the kin to personally protect and escort her to the king’s camp.

To make matters worse for him, Kisri knows that while her cousin may be much more lax than other men in regards to how he lets her live her life, he will still expect that she will enter into a mating with her virginity intact, and decides that this will be her last chance to experience pleasure before being forced to choose a man to spend the rest of her life with. She sets out to seduce Ennon, and while she may be inexperienced, she’s quite enthusiastic in her endeavors, and it isn’t long before Ennon’s resistance breaks and they give in to the heat between them.

Yet he knows that even as the king’s right-hand man, he’s not meant for the likes of Kisri, and that he will face banishment or worse for daring to break the king’s edict.

Overall, I of course adored it. Then again, if Moira Rogers wrote a treaties on the virtues of their new refrigerator, I’d still probably preorder it, so I may be a wee bit unobjective here

Recommended for fans of cool shifters with a nice twist on “mating” mythology, a woman who doesn’t let inexperience get in the way of what she wants, and a noble hero who cannot help falling for the one woman who is forbidden to him.