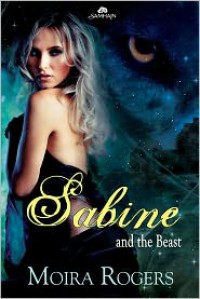 Three long years ago, Ciar, the High Lord of the Forest, left his lands for battle. He left behind the Sabine, the woman he loved but had refused to mate for fear that he would die in battle and leave her alone for the rest of her days. However, his mother never approved of Sabine as her son’s lover and potential mate, thinking the lowborn wolf was no match for her royal son. His mother’s witch cursed Sabine, with the intent that Ciar would forget about her and mate with someone more “worthy” of the match. The curse backfired, however, and instead of merely causing Ciar to forget her, now everyone who has contact with her is destined to forget her.

When Ciar returns from war, he’s furious to discover that not only is Sabine not waiting for him, but that his mother and all those around her claim to have no idea who he is talking about when he asks after her. Seeking her out, he comes across Sabine in a broken-down shack where she has been living since she was cast out of the castle after Ciar’s departure.

Refusing to touch him, for touch merely speeds along the curse, Sabine reluctantly agrees to travel with Ciar to the palace to attempt to convince the witch to break the curse, but even refusing touch is not enough to prevent Ciar from falling victim to the heartbreaking curse..
Overall, I of course adored it. I love the world in which there are different kinds of shifters who warred amongst themselves but have now gained a measure of peace, and where different species have different “mating magic”. I also loved the premise with the curse, and how incredibly horrific it would have to be to live with it, never having a single friend, or really being able to interact with other people.

On thing I do question, is will there be a sequel involving Farran and Iloria?? The next book up in the series according to the authors’ website is Kisri (which I already have pre-ordered, and so should you) and centers around the lion shifters mentioned in this book. I’m desperate to find out what will happen with Farran and Iloria in the future, and really hope that they have a sequel planned for them. So Moira Rogers, if you’re reading this, HINT HINT ;)