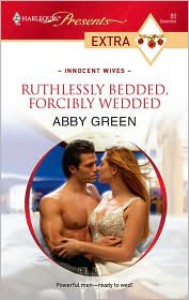 As much as I read, I'd never heard the term "category romance" until a few days ago, when I discovered the eHarlequin bookstore.. Oh, how my pocketbook is going to regret that discovery lol

There's just something about a short novel that's easy to read, easy to pick back up from where you left off, and that costs less than that Starbucks latte you're sipping on.

Oh how I will regret this discovery lol

So, about the book.

Was our hero all angsty and stubborn and unnecessarily cruel at times? Oh yes.

Was our heroine more than just a little bit of a Mary Sue? She sure was.

Was it predictable? Full of cliches? More cheesy than a plate full of nachos? Yes indeed.

Did I love it anyway? Absolutely!

As the synopsis says, Vincenzo Valentini believed Cara Brosnan was responsible in part for his sister's death, and sets out to get his revenge.

Things don't go quite as he planned, and he ends up sleeping with her, only to be disgusted by his intense attraction to her and for falling for what he believes to be her black-hearted, whoretastic ways.

So he turns the tables and cruelly reveals his identity, calls her all sorts of nasty names and accuses her of horrible things, then throws her away like the trash he believes her to be.

Poor Cara though, still recovering from grief over her brother's death, is humiliated by Vincenzo's ruthless behavior and betrayal. We fast forward two months and find out that even though Vincenzo used a condom, Cara is uber-fertile and got pregnant.

She confronts Vincenzo (who conveniently happens to be in Dublin celebrating some business something or other -- and where she somehow manages to get past Security to crash a black-tie party in her ratty jeans and t-shirt) and tells him about the pregnancy. He, of course, assumes that this little gold-digger somehow set out to get knocked up and trap him , so he very viciously forces her to marry him (through emotional blackmail) and truly believes that once the baby is born, he'll be able to "buy her off" and have her just walk away from their child.

There were a couple of surprises in there... Don't look at my keywords if you don't want to know.. Ahh, you looked, didn't you? Just couldn't resist, could ya? Well, I warned you :P

Overally I enjoyed it. It was angsty enough to keep things interesting, but nothing too deep. Even the "dark" parts were relatively easy to get through, which makes this an ideal stocking stuffer or escapist read. 3 1/2 Stars